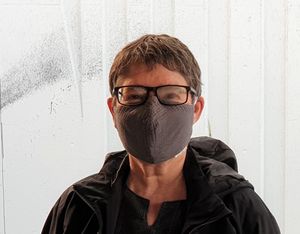 Brigitte Oleschinski was born in Cologne, Germany, in 1955.

A critically acclaimed poet, essayist and performer since the 1990s, she first started out as a political scientist researching the aftermath of German crimes against humanity in 20th century history. Deviating from her academic career, she felt increasingly compelled to explore the boundaries of discoursive language versus poetry in dealing with historical trauma, guilt and denial in sharply divided collective memory.

But what do poems differently? (Or do they?) In the shifting landscapes of the Anthropocene, there seems to emerge a new sense of urgency to what we can express and reflect and share by ever evolving forms of poetry. Language itself is a driving force of human evolution in so many diverse and hybrid patterns. From imagination to abstraction, from phantasy to invention, from curiosity to collaboration, all human thought derives from our inbuilt capacity for metaphorical speech. Mind and poetry are inseparable, their beauty intwined. By the same token, words unfurl uncanny social powers. As humans believe in words and despair by them, or do so by what they suppose to conceive in words, they also abuse and fight and punish each other over words.

Poems do no better than people, says Brigitte Oleschinski. Nonetheless, their special gift – as from any art – is the beauty of ambiguity. Here it all begins, in myriads of voices: the uplifting, the playfulness, the wonder, the shades and shadows of doubt, the freedom of diversity.

Brigitte Oleschinski's poetry collections won prestigious literary awards in Europe and she was invited to international poetry festivals around the world. In collaboration with fellow poets she translated poetry from over a dozen languages. Her work included multimedia poetry performences, stone age internet projects and academic guest lectures.

Your Passport is Not Guilty. Gedichte