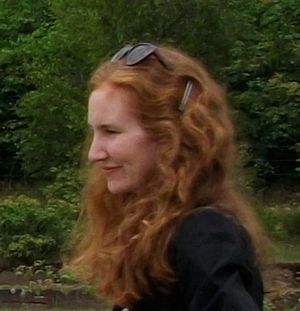 Donna Stonecipher grew up in Seattle and Teheran. She published four poem anthologies, most recently Model City (2015). For her third book, The Cosmopolitan, she received the National Poetry Series Award. She was also granted various work and residence scholarships, among others in Yaddo and Djerassi. Donna Stonecipher’s poems were published in many magazines like the The Paris Review, and Model City as well as The Cosmopolitan were translated into Spanish. Her prose book Prose Poetry and the City will be published in 2017. She translated from French and German and she is currently working on a translation by Friederike Mayröcker’s études for which she got an advancement award by the National Endowment for the Arts in 2015.

Love - for Berlin. I fall in love with cities. I fell for Vienna just recently. Cheating is allowed with this kind of love.

The feeling that there are so many people living here, so you can never see the end of it.

Tiergarten. I try not to know the paths by heart, which is getting harder. I just want to loose myself there over and over again.

Alienation is essential for my writing. Maybe that is because of a longer stay abroad when I was young. I wouldn’t know what to write about when being “home“.

„A la recherche du Temps Perdu“ – why not.