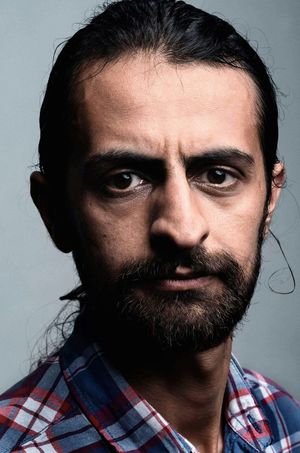 Kenan Khadaj was born 1990 in Swaida, Syria. He’s a journalist and author of short stories. He studied economics in Damascus, but due to the political situation he couldn’t finish university. In the beginning of the revolution in 2011 he started to work as a Journalist, writing for several Syrian newspapers. Besides he got involved in aid projects for war-affected children and adults. In 2014 he flew via Lebanon and Turkey to Greece and finally came to Germany. Since May 2015, he’s living in Berlin. Some of his journalistic work was published by a german newspaper, “taz.” Kenan Khadaj is involved in the Project “VERSschmuggel/ reversible”, which is organized by Literaturwerkstatt Berlin. He wrote for Stadtsprachen Magazine, several of his stories became part of the Anthology “hier sein weg sein”, also in a book by “Operation tetra-pack”. “Es lebe der Krieg” is his first Collection of Stories, which still remains unpublished. Currently, Kenan Khadaj is working on a novel.

I couldn't say it was only one reason, there were several altogether. Since I left Syria in 2014 due to political reasons, I was on the road from one city to another until I got to Berlin in May 2015, and knew immediately this is the city I would call home.

It's hard to summarize the answer, but I could easily say: the open-minded people, its multicultural atmosphere, and the fact that you can be yourself in Berlin no matter who you are.

as a person living in exile, there is a lot of things I miss like family, friends, the freedom of moving, thinking, speaking and writing in my mother tongue...etc.

I could say the east side gallery, it's where repression is turned into art. you can see people walking by. Taking a peek into a great complex history, learning and appreciating that life wouldn't be bright today without going through terrible times.

I could answer with yes, or no, and I will be wrong in both cases,

»The catcher in the rye« j.d. Salinger. »Immortality« Milan Kundera