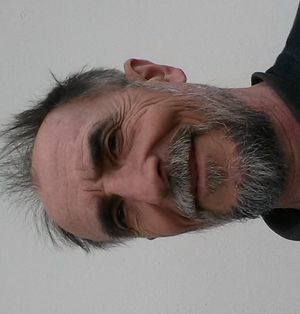 The writer, translator and director Milenko Goranovic was born in northern bosnia in 1955. 1974-1980 he studied dramatics, world literature and acting at the University of Sarajevo. Subsequently, he worked as a playwright, director and actor in Zenica and Sarajevo. In 1992 he became the director of the Kammertheater 55 in Sarajvo, before moving to Germany in 1994. He first lived in Stuttgart, then in Mülheim an der Ruhr where he worked as a playwright, director, actor, dramatic advidor and manager in both cities. He moved to Berlin in 2007 and works as as a free writer, translator and actor.

Both: first, my country plunged into a civil war, then I came to Germany by a coincidence and a few years later love came into play – that’s how I ended up in Berlin.

The cosmopolitanism. You can hear so many languages on the streets and nevertheless – or maybe therefore – none of these languages sound foreign, as if the whole world is at home here. Wonderful.

Nothing. At least nothing I wouldn’t miss in other parts of the world as well

Yes. Although the city I grew up in – Sarajevo – will always be a central location in my stories, this location becomes less and less the Sarajevo of the past and more and more my Berlin from today. And that’s a good thing.