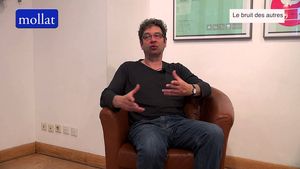 Philippe Braz is a playwright and performer who has been living in Berlin for 10 years.Originaly from Paris, he came to Berlin after having enjoyed many grants in Germany (Schloss Solitude, Genshagen writers program, etc.).His plays are performed mainly in Germany, France, and Switzerland.He has also been writing short stories, poems, and "Hörspiele" for France-Culture (the last one, in December 2016 was titled "Cabaret Dada")He founded, along with Brigitte Athéa and Markus Lang, the Collectif 5050, to perform his texts with music, computer and video on stage.He works as "dramaturg" in Berlin.

It's a long story.