Acèle Nadale is founder and publisher of the online literary magazine www.afrolivresque.com. She was born in Cameroon but left her homeland in 1995 to study computer science in Germany. Her passion for literature was kindled in childhood by authors like Chinua Achebe and Mongo Beti. After she worked as a consultant for several German companies, her engagement in African literature became more concrete in 2015 when she founded the magazine, which was well-received by readers and experts. In addition to her work as publisher of the magazine, Acèle Nadale moderates workshops and seminars, and advises authors, publishing houses, and literary organizers on their literary projects as well as on web marketing and digital communication.

Despite the darker chapters of its past, Berlin is one of the few European cities that manages an appealing blend of modernity, culture, and cosmopolitanism. Perhaps that’s why, when I left Cameroon and landed at Tempelhof as a young woman in the mid-90’s, I immediately felt like I was in the right place. Berlin is a living organism that breathes, laughs, cries, is sad and anxious at the same time—and still thrums with the sense that everything will be better soon. There’s something about this city that particularly attracts artists from all over the world—not on vacation, but to live. In the last 15 years, the influx of artists has enriched the cultural landscape of the city and opened very interesting spaces for international encounter. And so gradually, various projects by African and African-American artists living in Germany or elsewhere have begun to make themselves visible in the Berlin scene. In the arts—from poetry, film, and dance to theater and literature—spaces and names have established themselves as points of reference, to the delight of fans of African literature like me. It was therefore a particular pleasure to (re-)discover these charming people and places while compiling this list. 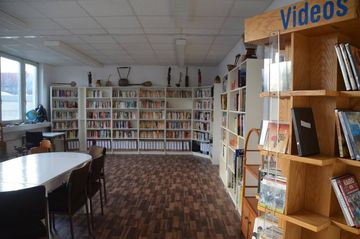 The library of the Afrika Medien Zentrum is located in Reinickendorf, in the north of Berlin. It’s a friendly place that invites visitors to discover African literature translated into many languages—above all German, English, and French. The center organizes regular readings, seminars, and shows, creating a space for encounter and exchange between the various cultures of Africa and German society. The library opened in August 2010 on the initiative of Herve Tcheumeleu, who comes from Cameroon and was a student at the time. The collection includes 3000 books, newspapers, CDs, DVDs, and other media by African authors which can be borrowed or enjoyed on-site. Here you can find both classic and contemporary African works, such as the Nigerian writer Chinua Achebe’s Arrow of God, the Congolese Alain Mabanckou’s Broken Glass, South African JM Coetzee’s Disgrace or Chimamanda Ngozi Adichie’s Half of a Yellow Sun. 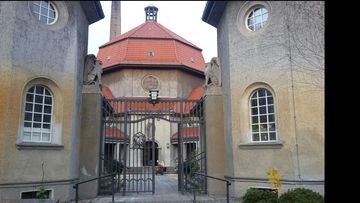 2. Savvy Contemporary : THE LABORATORY OF FORM-IDEAS

If you like works of African literature and other artistic forms that lie outside the mainstream, that deconstruct and reconstruct fixed identities, that give voice to silence and silence noise, then Savvy Contemporary is the place for you. Saavy offers the opportunity to discover both contemporary art in Berlin and African poets and writers. Since its founding in 2009 by the Cameroonian Dr. Bonaventure Soh Bejeng Ndikung, Savvy has been organizing art exhibitions, performances, film showings, concerts, readings, lectures, and residencies for writers and others artists. In addition, there’s a performing arts documentation center, a public library, and an archive of German colonial history. Teju Cole, Michael Salu, Petina Gappah, Abdourahman Waberi, Fatin Abbas, and Taiye Selasi are only a few of the major African authors whose readings have already delighted visitors to this space in Wedding. 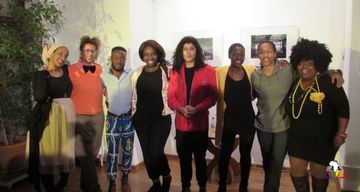 3. One World Poetry Night - Spoken words from the world to the world

“One World Poetry Night” is a poetry event organized by the dynamic Lahiya Stefanie Aukongo, which has taken place in Kreuzberg every 2nd Tuesday of the month since its founding in 2014. “One World Poetry Night” offers space for more than 13 events, over 54 artists from every continent, and a huge range of languages, including Swahili, Yoruba, Zulu, Oshiwambo, Igbo, Arabic, French, Spanish, German, and English. Here, words are free. The stage is open to anyone who wishes to express themselves artistically—one just need ask Lahya, the hostess. The event takes place at the community center KOTTI e.V.—a charming, warm space that transforms at night into a world of words. This space was chosen especially because of its handicapped accessibility. The event is free. 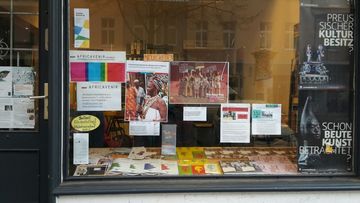 The organization AfricAvenir International, which supports an independent African cultural enter, was founded in Douala, Cameroon, in 1985 by the writer Prinz Kum’a Ndumbe III. The German branch opened in 2007 in Wedding. Other branches opened in Windhoek, Namibia, in 2007, and in Cotonou-Calavi, Benin, and Vienna, Austria, in 2012. More branches are planned in Senegal, France, the United States, Canada, and Brazil. AfricAvenir International offers the Berlin public a platform to exchange and acquire knowledge about Africa and the African diaspora through conferences, readings, exhibitions, and forums for dialogue and networking. One of the organization’s flagship projects is the restoration of an audio- and manuscript archive produced between 1920 and 1930 in the various languages of Cameroon. This, as well as around 300 books by African and European authors published between 1848 and 1944, are to be digitized with the help of French, German, and Austrian specialists in order to make the resource accessible to researchers around the world. 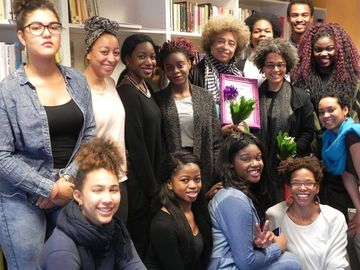 Präsenzbibliothek Each One Teach One (EOTO) e.V.
Müllerstraße 56-58
13349 Berlin

5. Präsenzbibliothek Each One Teach One (EOTO)

Vera Heyer’s dream came true 19 years after her death. It had been Heyer’s wish to turn all the books and texts she had gathered during her life into a publically accessible library. The library in Wedding was founded in March 2014 by the “Each One Teach One” (EOTO) society, and contains over 5,000 books, films, excerpts, and other archival material produced by black authors. Vera Heyer began her search for texts written by black people in Germany and the rest of the world in the 1970’s. The EOTO library organizes regular readings, seminars, and other literary events pertaining to African literature. Particular attention is given to projects that empower young Africans and those of African heritage to discover their roots through reading and writing. 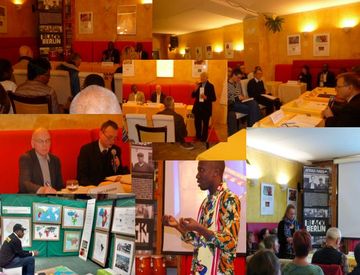 In 1993, Guinean (Conakry) native Oumar Diallo founded the Afrika Haus in Moabit. This space for cultural encounter and exchange is run by the Farafina Afrika-Haus society (e.V.) and has become an institution where the great diversity of Africa comes together for conferences, meetings, readings, debates, and film showings with a focus on literature, intercultural debate, and political training. Oumar Diallo is also the author of Black Berlin (Metropol Verlag, 2013), an anthology that traces African migration to Berlin over the course of the last three centuries, chronicles immigrant struggles for emancipation and social equality, and showcases Berlin’s various African communities and their current political activities. 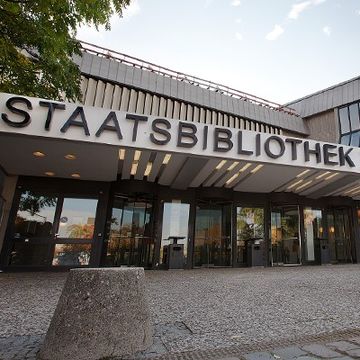 After the Second World War, a research project began at the Akademie der Wissenschaften in Göttingen to categorize and archive manuscripts from the Orient that had ended up in Germany. The African manuscripts were divided into two categories: a first publication included seals, letters, language samples, vocabulary lists, and correspondence from missionaries in African languages like Swahili, Herero, Zaramo, Xhosa, Shambala, or the Vai language of Liberia. The second publication contained manuscripts from Muslim Ethiopia in Arabic, Harari, Silt’i, and Amharic. Many of the documents are quite old, some even from the 15th century. The collection contains more than 355 archives. 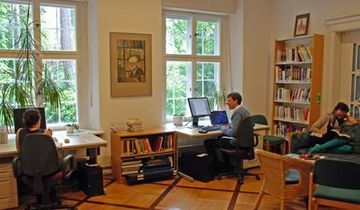 The Leibniz-Zentralbibliothek is a public research center focused on the modern Orient. The library contains more than 70,000 books and magazines, including 10,000 works of Sub-Saharan literature. Regular symposiums are organized to foster exchange between German and foreign researchers; here scholars can present and discuss the results of their research. In addition, the library organizes workshops and conferences in cooperation with national and international organizations to share this knowledge and to provide a platform for discussion of the politics and economy of the regions in question. 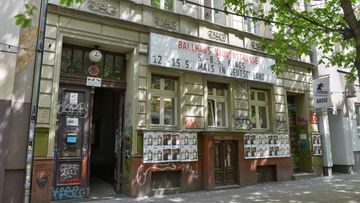 The theater and cultural center “Ballhaus Naunynstraße,” located in the lively neighborhood of Friedrichshain-Kreuzberg, fosters relationships between people from various backgrounds and cultures and offers a platform for those of immigrant background to express themselves artistically. The theater has existed in its current incarnation since 2008, and offers various interdisciplinary festivals, film showings, concerts, and reading series as well as roundtables with African writers. 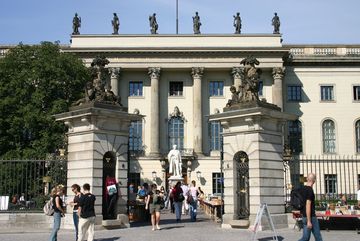 10. Dambudzo-Marechera-Archiv at the Humboldt University

The Humboldt University holds an extraordinary archive of one of Africa’s most brilliant writers. Dambudzo Marechera was a poet and writer born in 1952 in Rusape, South Rhodesia (now Zimbabwe). He died on August 18, 1987 in Harare, Zimbabwe. He studied at the University of Rhodesia, but was expelled after protesting the low salaries of black employees. His story collection The House of Hunger (1978) was praised by critics. The book is a powerful portrayal of life in his country under white rule, and won the Guardian Fiction Award, making Marechera the only African to win the prize in 33 years. Flora Veit-Wild, Marechera’s biographer and literary executor, and professor of African literature at the Humboldt University until 2012, gave the Marechera archive to the institution. The archive contains all the manuscripts Marechera left behind at the time of his death in 1987, as well as a multitude of documents and photographs pertaining to his life and work, transcripts of interviews, letters, school records, and much more.