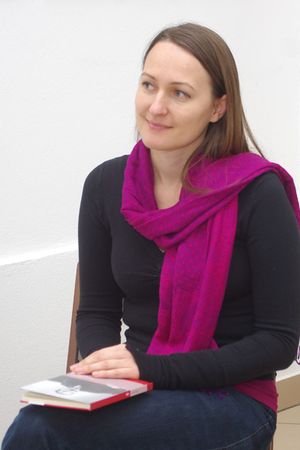 Born in 1978 in Celje, Slovenia. She studied translation and interpreting (German, English) in Maribor and Graz as well as social eduction at the university of Ljubljana. Ana Jasmina Oseban has translated works of Roth, Musil, Grillparzer, Zweig, Böll, Trojanow, Reich-Ranicki, Wolf, Lewitscharoff, Nadolny, Franck, Domin, Ausländer and others.2013 she was awarded the Radojka-Vrančič prize for oustanding young translators. Several fellowships (S. Fischer Stiftung, Robert Bosch Stiftung) and stays at the Europäischen Übersetzer-Kollegium Straelen and at Literarisches Colloquium Berlin.

Green streets, as soon as the long Berlin winter is over.

Vicinity to the Mediterranean life.

Hm, maybe? … Others could answer this question better than me.