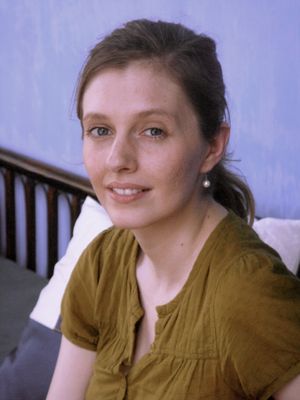 Born 1976 in London/Great Britain, Clare Wigfall has lived in Berkeley, Prague, Edinburgh, Stuttgart, and presently Berlin.
She holds an MA in creative writing from the University of East Anglia, for which she was awarded the Curtis Brown Award.
Her debut short story collection "The Loudest Sound and Nothing" (Faber & Faber) was published in 2007 to critical acclaim. The following year she won the BBC National Short Story Award and was later nominated by William Trevor for an E.M. Forster Award.
Clare was a 2017 fellow at the Akademie Schloss Solitude, following which Edition Solitude published a German edition of selected stories under the title "Alles, was ich über Zahlen weiß" (2018).
Having taught writing workshops throughout Europe, she will be a guest lecturer at Bard College Berlin in 2019.  She is currently finishing her second story collection for Faber & Faber, after which she is under commission to write a novel set in colonial-era British Malaya.

I came on a whim. My husband and I visited Berlin for a weekend while we were living in Prague and loved it so much we decided on the train home that we would move here.

I love that the city allows one to be an artist while still enjoying a good quality of life, and it's a great city to live in with children.

A good cup of tea. Cheddar cheese. Having my family in close proximity.

No. But I became a mother in Berlin, so now I have to take care that my identity as a writer is not subsumed by also being a mother to three wild little girls.

I don't really wish I'd written anyone else's books, I just wish I had more time to write my own. They exist in my head, but I wish they also existed on paper too.

Has Anyone Seen my Chihuahua?

The Loudest Sound and Nothing