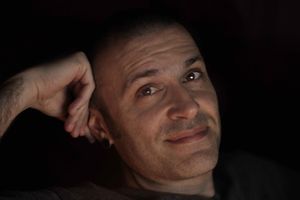 Dario Deserri was born in 1974 in Ferrara. He studied History and Archeology in Bologna. After various international internships and a study program in the US and Turkmenistan, he worked for several years as an educator in a museum. After completing his training at the British Institute in Ferrara, he had been working as an "Operatore Culturale" and touristic guide for the local public administration in Ferrara, but also as culture journalist and language trainer. In his first professional experience, he worked as an archivist for the management and maintenance of databases of the city plan in Ferrara. Since 2008 he's been living in Berlin, where he teaches Italian. In 2011, he won the Laurentum Prize (Rome) in the category Italians in the World. In 2012 and 2013 he was amongst the first three finalists of the international division of the Vignola Prize (Modena). In 2014 he published his first novel "Come le Nuvole sopra Berlino" (Like Clouds over Berlin). Due to a full-time training in journalism, he left his job at Bertelsmann AG and completed his training after an internship at the International Literature Festival in March 2017. Dario Deserri is currently editor of the literary magazine L'Ippogrifo.

My destiny, maybe. Friendship and love. A long story that began in New York in 2000. At that time, Sven from Mainz, my roommate, already spoke about Berlin while drinking wine in a bar at the World Trade Center...

True care I couldn't say / through which streets / so far away / I made it after so long time back home. / I'll tell you only I left myself / being driven out from the dark / from whom, who took me / in silence by the / hand. (Giorgio Bassani)

The beauty and weather in Italy. The really special atmosphere of Ferrara ...

It's where my life here started. The Gotenstraße, not far away from the house, in which Marlene Dietrich was born. The Natur-Park am Südgelände takes good care of my first memories in Berlin.

Another man no, I wouldn't say that. But I am a different author. As paradoxical as it may be, Berlin is a city of solitude. Exactly this is essential to becoming a writer.

It's difficult to give an answer to this question. I answer with two titles that tomorrow could be already different ... Prose: „Le Città Invisibili“ - Italo Calvino. Poetry: „Ich bin in Sehnsucht eingehüllt: Gedichte“ - Selma Meerbaum-Eisinger.