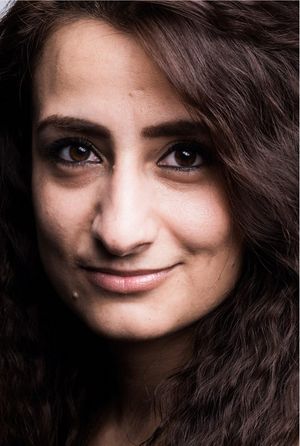 Widad Nabi was born in Kobani. Nowadays she lives and works in Berlin. The Kurdish-Syrian poet and author completed her Bachelor of Economic Studies at the University of Aleppo. Her work has been published in numerous magazines and newspapers. Some of her writing has also appeared in English, for example in Tulips Magazine in Washington, or in French, for example in the anthology L’amour au temps de l’insurrection et de la guerre (Maison de la Poésie). In 2013 her book Time for Love, Time for War was published in Aleppo. Her book Syria and the Senselessness of Death was published in 2016 in Beirut. In October of the same year her writing got published for the first time in German – one of her pieces was included in an anthology of texts from Germany called Weg sein – hier sein by Secession. Some of her writing appears in the book Die Flügel meines schweren Herzens, an anthology published by Manesse in 2017. So far she has yet to publish a book of only her writing.

World politics. After I had to leave Syria, Berlin turned out to be the perfect choice for various reasons, for example it's friendly atmosphere. Most importantly it also reminds me of Aleppo.

Berlin is a multicultural city, which has room for every culture, regardless of religion, race, or nationality.

I miss the house of my childhood, which is brimming with memories in every nook and cranny. I also miss intense contact and communication – immersing myself in society – due to my lack of knowledge of the German language.

I would say Kulturbrauerei. The old architecture reminds me of some old areas in Aleppo and the cultural atmosphere there fascinates me.