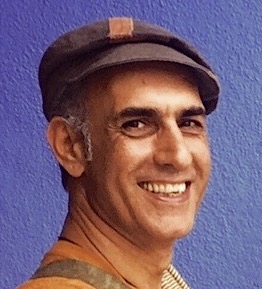 Bahram Moradi got in contact with theater when he was fifteen years old, and then performed in many plays. During the revolution in Iran in 1978, he became a member of a left party. He founded a theater group, wrote many plays, performed, and directed. In 1982, during a performance of one of his plays, he and his whole group were arrested right at the stage because of criticizing the government, and he was imprisoned for two years. After being released he was prohibited to continue working at the theater. He had to escape just a few years later. In Germany, he concentrated on writing stories and novels. After being published twice in Iran, he didn’t get permit for another novel. Because of the absurd and far reaching censorship of the authorities he decided to stop publishing books in Iran. He lives and works in Berlin since 1994.

What brought me to Berlin are the nationwide aggressive politics of Iran’s government against differently minded people.

Sometimes I miss smells, colors, atmosphere, things, you cannot see but feel… and which I probably took in at different places in the world.

I constantly find new beautiful places in Berlin. One of my favorite spots: Along the Spree between Hauptbahnhof and Schloss Bellevue.

I must admit that I really became a different person here: cosmopolitan and tolerant. I write in a way I find is right; without self-censorship or censorship by society — which certainly would not be possible in my home country.

I dreamt of writing about social decay caused by the revolution in Iran for years now. A first draft is done already and I hope to publish it next year.