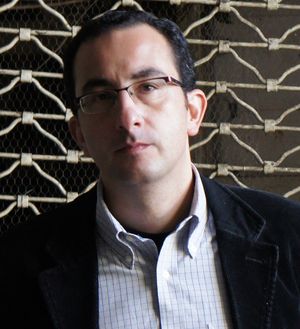 Christos Asteriou was born and raised in Athens, Greece. He is a German teacher by day and a writer of fiction by night. He is a nomad of sorts, as the island of Paros and the city of Berlin have been claiming much of his creative time in the past twenty years. His love for European literature led to his German and Modern Greek Literature studies at the University of Würzburg; that was the beginning of his adventure in the world of letters.
His first two books bore traits of the mystery and gothic genre, whereas his latest one is a political novel that ponders on the question of whether culture can function as a shield against barbarism in times of crisis. Several of his short stories have been translated into English, Italian, Serbian and other European languages.
As a writer, Christos Asteriou has regularly contributed to salient national and international literary publications with articles on literature and art. Apart from his writing, he has also delved into translation, mainly out of a need to share the work of his most favorite authors with Greek readers. He thinks the work of translation to be an act of cultural understanding as opposed to a mere mechanical procedure, a learning experience that gets one into other authors’ shoes in order to see the writing process from their point of view. Christos got the prestigious Literature Scholarship of the Berlin Academy of Arts in 2013, whereupon he had the opportunity to present his work to German audiences. His installation “Instalgia”, a reflection on the modern nostalgia manifested through Instagram vintage filters, was part of the “Vertigo of Reality” exhibition in the Berlin Academy. As a Fulbright scholar for 2015-16, he visited Columbia University and spent time with Greek-American communities in the wider New York area as part of his research for his next book, which focuses on issues of diaspora and identity. Since October 2016 he is teaching at the Free University of Berlin.

An invitation to work at the Free University.

The bohemian atmosphere, the way of life in the city.

I am still the same but I can focus more on my work in Berlin.

Her naked body and other stories of the bizarre

The journey of Jason Remvis - A true story