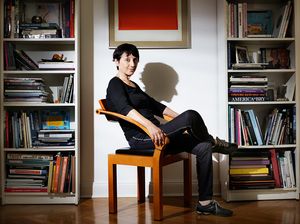 Esther Andradi is a writer. She lived in different countries and commutes between Berlin and Buenos Aires. She was born in Ataliva, a small village in nowhere Argentina.After finishing her studies in Journalism, she emigrated in 1975 to Lima in Peru, where she worked as a reporter, columnist and executive editor.
Since 1983, she taught Spanish in Berlin, conducted interviews for the Deutsche Welle, wrote screen plays for TV and broadcast features, and became a mother. She published various essays, stories, micro fiction, poems, and novels. Her essays about culture, migration and memory were published in America, Spain and Germany.
She also translated poems by May Ayim into Spanish, published the anthology VIVIR EN OTRA LENGUA (Living in a different language), and introduced literature by Latin Americans who live in Europe.
Her works were translated into many languages, most recently into Icelandic.

All of the above combined and simultaneously.

I love the city just the way it is: strange and personal. Unique. Constantly changing.

The light in winter time when it’s not snowing.

There are many. Most of all, my Kiez. Also, Havelchaussee, Volkspark Wilmersdorf, Teufelssee… and those summer nights.