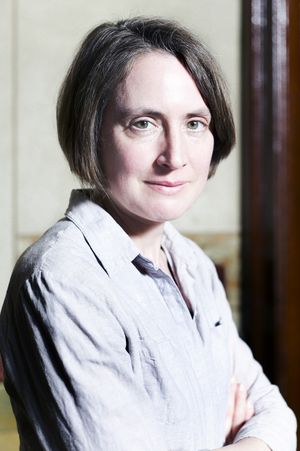 Isabel Fargo Cole grew up in New York City and studied at the University of Chicago; since 1995 she has lived and worked in Berlin as a freelance writer and translator (e.g. Alexander Kluge, Wolfgang Hilbig, Franz Führmann, Klaus Hoffer und Annemarie Schwarzenbach.) She was co-editor of the magazine „lauter niemand“ and co-organizer of the „Literaturlabor“ in the years 2006-2008, she also initiated and co-edited www.no-mans-land.org, which takes the form of an online magazine for new German literature in English translation. Together with Juli Zeh and Ilija Trojanow she started the Initiative „Writers Against Mass Surveillance“. Her first novel, „Die grüne Grenze. Ein Märchen“ (“The green border. A fairy tale”) will be published by Nautilus Edition in 2017.

It was in 1987 when I first came to Berlin (on a school-trip in the course of a student-exchange-programme in Bielefeld) and I already was completely smitten with the city.

All the still-broken, the gloomy, the green, the living, the serenity, the struggle with history.

I’m older and wiser than I was before, back home.

"A Room of One's Own" (Virginia Woolf)

"Among the Bieresch", Klaus Hoffer

"The Sleep of the Righteous", Wolfgang Hilbig

"All the Roads Are Open" von Annemarie Schwarzenbach