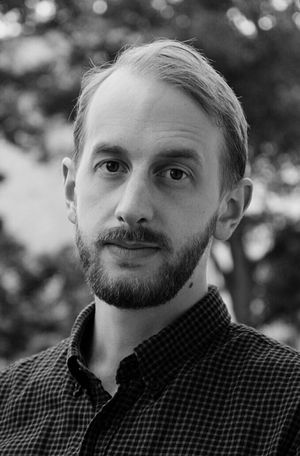 Jesper Festin was born 1988 in Uppsala, not far from Fyris River. Since 2014 he lives as a freelance translator near small Panke River in the North of Berlin. After his German Studies at University of Lund and at the Humboldt University in Berlin he participated at the German-Swedish Workshop organized by the “Europäische Übersetzerschmiede” at the Baltic Centre Visby and the Translator’s House in Looren. It was there where he should meet not only his future editor, but his girlfriend also. A Master of Fine Arts in Literary Translation at the Valand Academy in Göteborg, first contracts and more Workshops were following. He received an honorable mention from the Swedish Translator Awards Arets översättning in 2015, for his translation of children’s poems Jag stor du liten.

Love and coping with restlessness.

The abundance of bookshops.

The shutdown of Tegel Airport.

Panke River. For walking alongside, cycling next to, sitting on its bank. Not for swimming, though.

„The Death of a Beekeeper“ by Lars Gustafsson.

Bokförlaget Thorén & Lindskog, Göteborg, will be published in 2017 Novel