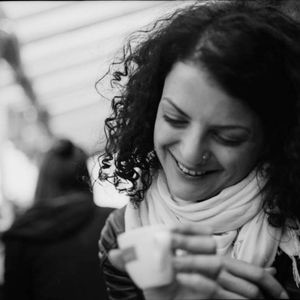 Lucia Ferrantini was born in Rome, 1980. She studied philosophy and German studies in Rome and Bochum (Germany). 2006 she started a Master-programme in publishing, in Milano, where she also was working part-time for nine years, while working as a literary translator as well. She participated in the German-Italian ViceVersa Workshop 2013 in Loreen and 2014 in the Summer Academy, so she quit her part-time Job in the editorial and moved to Berlin in 2015. She lives in Kreuzberg as a freelance translator of literature, keeps on writing book reviews and working as an agent for different Italian editorials. She’s a soccer-fanatic and a dancer.

Berlin. I’ve been here the first time in 19954, when I was 14, with a School Exchange Program. We’ve visited the „Tacheles“. I’ve never forgotten that day.

Freedom. There are no rules about clothes, hairstyle, working times, times in general. Everything is possible and (almost) nobody feels uncomfortable. And you can see this reflected in people’s heads.

The roman sun, and the Milan Aperitif-Life. (Good shoes-stores too.)

An old one: the Turkish Marketplace at Maybachufer. A new one: Klunkenkranich, the cultural roofgarden in Neukölln.

Yes, I think, in the way that Berlin’s variety enriched my attention for the differences. Which is a fundamental thing in my translation work.

La Nave di Teseo/Mailand, will be published in 2017 Non-fiction

Giunti Editore, Florenz, about to be published in 2017 Detective-Story