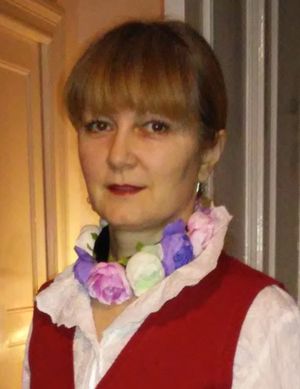 The artist shows her artisitic and literary work

In 1983 Marina Lioubaskina received a diploma in fine arts in Kaliningrad, Russia, and an additional diploma in 1987 from the faculty of fine arts at the college of education, St. Petersburg, Russia. In 1991 she was rewarded an art scholarship at the Centre Culturel Premontre, France. For a cultural journey to Oslo and Bergen, Norway, she received a private scholarship in 1995. A residency fellowship at the artist’s studio in Schollene, Germany, followed in 2000. In the same year she received a DAAD-scholarship to visit the German-Russian Youth Forum in the cities of Dresden and Berlin. In 2006, she resided a second time at the artist’s studio in Schollene, Germany.

The artwork „Leben, Liebe Frieden“, was bought by the Art Advisory Committee of the German Bundestag. Lioubaskina read Anna Achmatova’s Requiem at the event REQUIEM (with Tina Engel) at the Großes Schauspielhaus at Gendarmenmarkt / Berlin. She participated in the exhibition „500 years of women’s art in Russia“ at the public gallery Tretjakov in Moscow; as well as in the exhibition „na Kurort“ at the public art hall in Baden-Baden. Later, she contributed to the exhibition „From the red star to the blue cupola“ at the IFA-gallery in Berlin, as well as the to exhibition „Adventures of the black square“ and „recent drawings“ at the Russian Museum in St. Petersburg, Russia. She participated at the festival „Uliza pravdy – The road of truth (in collaboration with V. Sorokin, P. Mamonov, A. Petljura, G. Vinogradov) at the Sophiensäle, Berlin. Subsequently, she contributed her artwork to the exhibition „Fashion and Style“ at the MMOMA, Moscow Museum of Modern Art, and worked with the group project „GendART“.
In 2017 she will be contributing the the exhibition „art on prescription“ at the parallel programme of the Venice Biennale 2017.

Marina Lioubaskina performed at the Book Fairs in Frankfurt and Leipzig, at the Tübinger Book Festival, the Stuttgart Book Week and Berlin Buch. The artist’s artwork is exhibited at the MINT Museum of Art in Charlotte, North Carolina, USA; the Art Collection of the German Bundestag; at the Moscow Museum of Modern Art; the Museum of Modern Art, Skopje, Macedonia; at the National Library in Berlin, the MMOMA Moscow House of Photography; Heimatmuseum Schollene, Germany; Cultural Centre of Differdange, Luxembourg; and in private collections in different countries.