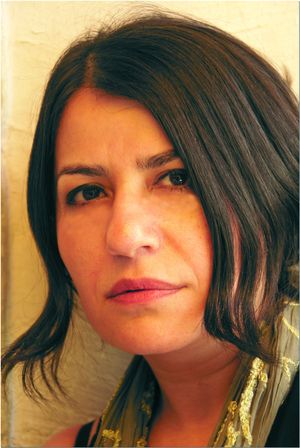 Born in Kayseri, Turkey, Menekşe Toprak came to Germany with her parents when she was 9 years old. She went to high school in Ankara and later studied at the Faculty of Political Science at the University of Ankara. Since 2002 she has been working as a freelance author and radio journalist between Istanbul and Berlin. She writes in Turkish, stories and novels, yet also loves to read in German. Her collection of stories Valizdeki Mektup (The Letter Inside the Suitcase) was published in 2007, followed by Hangi Dildedir Aşk (What Language Has Love) in 2009, and her debut novel Temmuz Çocukları (July Children) in 2011. Her latest book, Ağıtın Sonu, was awarded the prestigious Duygu Asena Prize for the novel of the year 2015. The German translation of the novel will be published under the title Die Geschichte von der Frau, den Männern und den verlorenen Märchen by Orlanda Verlag, Berlin, in the autumn of 2017.

First work, then love. Right after college I started work at a Turkish bank and got sent to a local branch in Berlin for two years. Berlin was beautiful, and I was in love with a man and with literature.

I love how green Berlin is and the smell of the linden trees in summer. I love the Turkish side of Berlin but also how uncomplicated people are, such people are harder and harder to find in Istanbul.

The sea and the boats of Istanbul. Wannsee is a bit small in comparison.

Nollendorfplatz. To sit in one of the cafés and wander around Winterfeldplatz.

Hard to say. I like working in both cities, Istanbul and Berlin. I often collect stories in Istanbul, which I then write down in Berlin. This way both cities are connected with each other.

2016  Writers Grant from the Civittela-Ranieri Foundation in Italy.
2015 Ağıtın Sonu was awarded the Duygu Asena Prize for the novel of the year.

And There Will Be Singing": An Anthology of International Writing from the Editors of "the Massachusetts Review"

The Letter in the Suitcase