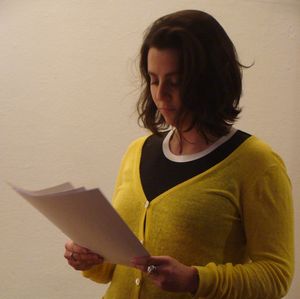 Sarah Raquillet was born in Paris in 1987. She studied Philosophy and Sociology as well as Contemporary Dance in Paris and Berlin. After a stint at the Parisian bookshop Atout Livre she became interested in everything to do with publishing and did various internships in Berlin (among other places at Elisabeth Ruge Agentur, Lettrétage, and Matthes & Seitz Berlin), before dedicating herself fully to literary translation in 2015. In 2016 she took part in the Georges Arthur Goldschmidt Programme for young literary translators, whereupon she signed her first translation contract. In 2017 she participated in the symposium "Penser en langues – In Sprachen denken" for translators of Humanities and Social Studies in Cerisy-la-Salle and Paris. She spent several more weeks in Paris on an Elmar-Tophoven residency fellowship from the Robert Bosch Stiftung. She lives in Berlin as a freelance literary translator.

My studies. I completed my Philosophy degree at the Humboldt University and fell in love. With the city itself and with a special someone.

Its vastness. The flair of freedom. How what is possible seems so self-evident and natural. The winter light and the quiet when the city is covered in snow.

Definitely. Living daily life in a foreign language makes French an intimate haven, so I now experience the language differently and question it. Here the language – not the country – is my home. I feel freer and more creative in this in-betweenness.