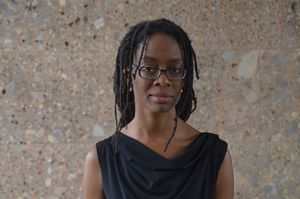 Sharon Dodua Otoo, the Ingeborg-Bachmann-Prize winner of 2016, is a Black British mother, activist, author, and editor of the English language book series Witnessed. (›Black‹ is deliberately written with a capital B.) Her most recent publication is the German language novella Synchronicity (edition assemblage, 2014) which appeared in English at the end of 2015. Sharon's first novella the things i am thinking while smiling politely was published in English in 2012 and appeared in German as die dinge, die ich denke, während ich höflich lächele in 2013 (both also in edition assemblage). Sharon is an active member of the “Initiative Black People in Germany” (Die Initiative Schwarze Menschen in Deutschland [ISD-Bund] e.V.) and Phoenix e.V. She lives, laughs, and works in Berlin.

I came to Berlin for the first time as an exchange student. That was back in 1995.

The activist communities, which achieve wonderful things in this city.

Yes! Here I am now known as the winner of the Ingeborg Bachmann Prize and I am getting my very own profile at Literaturport. In England it's more like „Sharon who“?

„The Canterbury Tales“ by Geoffrey Chaucer

the things i am thinking while smiling politely

The Little Book of Big Visions. How to be an Artist and Revolutionise the World