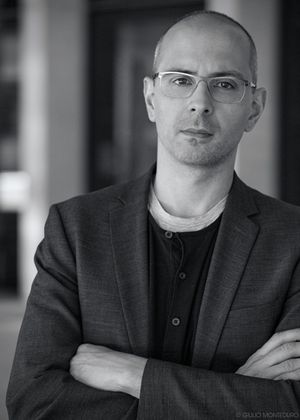 Stefano Zangrando was raised in Bolzano, South Tyrol, in an Italian-speaking family. After finishing high school he moved to Trento, where he studied Literature. He came for the first time to Berlin in 2000 as a language student and doing an internship; more stays as a doctoral student and DAAD scholarship recipient were soon to follow. In this time he wrote literary reviews for Italian newspapers and magazines, completed his PhD, and started working as a cultural mediator and translator of German literature. In 2006, he was one of the co-founding members of the International Seminar of Novel Writing at the University of Trento, which he still coordinates today. In 2008, he received a scholarship from the 'Junge Akademie' of the Berlin Academy of the Arts, in 2013 then, he participated in the Internationale Übersetzerwerkstatt at the LCB in Berlin. In 2016 he organised a translation workshop in his native town and became a member of the South Tyrolean Author's Association. He lives, writes, and commutes as a lecturer, translator, and writer between Berlin and the Trentino region in South Tyrol.

A coincidence – which, I assume, is just another word for fate.

The somewhat unharmonious variety – from the structure of the city to the unpredictability of each and every encounter one makes – and the hazy, laid-back nature.

My son and the fruits and vegetables from my grandparent's garden.

Every corner where the slanting sunshine can touch you unhindered on a late afternoon when the seasons are changing.

Not really. Here I can simply concentrate on myself and my writing, while the time spent back home is usually more of a distraction or marred by non-convenient compromises.

My own, which so far has been stuck for way too long inside my head. I prefer to re-read my favourite literary works than to regret not having written them myself – quite to the contrary: You can never have enough role models to draw inspiration from.

2008  Residency scholarship from the Academy of Arts, Berlin