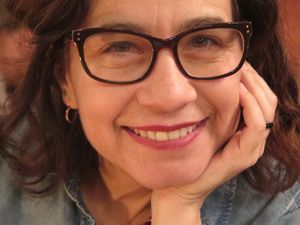 Valeska Brinkmann was born in Brazil, in the coastal city of Santos. She studied TV and radio journalism at the FAAP University in São Paulo. She has lived in Berlin since 2003, where she works at Rundfunk Berlin-Brandenburg. Valeska Brinkmann writes short stories and children’s literature. In 2016 she published the bilingual children’s book Pedrina, a perua que queria ser pavão—die Pute die ein Pfau sein wollte with bülbül Verlag Berlin. She is included in various anthologies in Germany, Brazil, and Portugal. In 2017, one of her short stories was published in the Berlin online magazine Stadtsprachen. Translations of Hilde Domin and Mascha Kalekó have appeared in the Brazilian poetry blog escamandro, and she has participated in various writing and translation workshops.

Living in a metropolis where thousands of things happen, where everyone dresses as they like, where I can travel everywhere with public transportation, but which at the same time has the feeling of a village, where I’m greeted by the baker, and the butcher gives my child sausages.

The sea. But I always miss the sea.

I’ve been a different person since I started speaking, reading, dreaming, and writing in German.

The Passion According to G.H. by Clarice Lispector and “Death in Venice” by Thomas Mann.