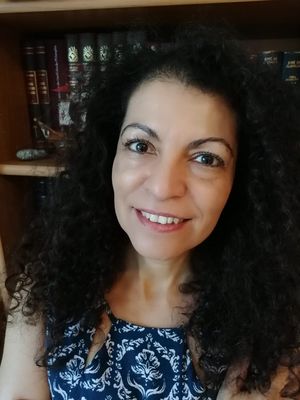 I came to Germany because of its language and culture, and to Berlin because of world policy and various personal reasons. I lived in Bonn for many years and it had always been my wish to live in a metropolis.

I love that some places are able to transfer us into other cities. The architecture and landscape are very different in some part of the city, and make you believe you really are in another city.

More tidiness and safety in some places, and more flowers

It gives me a peaceful and cozy feeling when I walk beneath the shadow of trees through the narrow streets around the Rüdesheimer Platz. The beautiful architecture of the apartment buildings is enchanting.

Certainly yes! Every surrounding influences a writer in a certain way. In Berlin, I am interested in biographies of people from different countries, in politics, and in the environment from a global perspective.

Many good works. Starting with those of Ingeborg Bachmann, Marguerite Yourcenar, Harper Lee, Clarice Lispector, Virginia Woolf, Guimarães Rosa, Simone de Beauvoir... there are so many, that I can’t really name a single one.

Depois do canto do gurinhatã