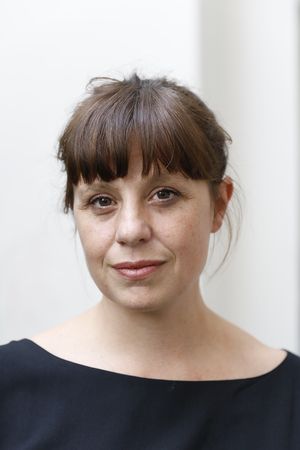 Delphine de Stoutz, born on Lake Geneva, studied theatre and literature at the University Paris X - Nanterre and at the University of Oregon. She has worked for many years as a dramaturg for numerous directors and was Secretary General of the Théâtre de Carouge in Geneva for several years. There she directed projects that pose political, economic and social questions. In 2016, after having conceived the play The children of Heracles together with 40 refugees, she left the theatre and has since then devoted herself to prose.

Her novels deal with feminist themes and post-migrant culture. Her debut novel Adult (R) was published by Lucane Editions in 2018. In 2019 she received a scholarship from the Centre National du Livre.

She is also the founder of the Netzwerk französischsprachige Autorinnen in Berlin e.V.

The ice blaze on the Warschauer Brücke on a November day.

That people are orphans of the world, reinventing society in their own image...

Am Köllnischen Park, in Mitte...

Absolutely! Here it makes no sense to play the social game, so I had to learn to look at myself, to accept and love the person I am. This city has taught me honesty and respect.

the Ice Palace from T. Vesaas