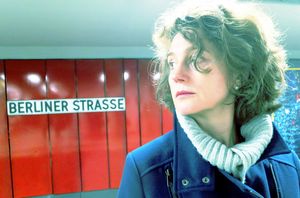 My studies. An unquenchable thirst to read. In 1986, it was little short of a miracle to be able to go to West-Berlin for a semester to study German Philology if you were a student behind the Iron Curtain. But the miracle actually happened, and the semester at the Free University in Berlin turned into a whole free life.

Generosity. It’s a city for every kind of way of life, every dilettantism, and every size of wallet. The biotope of metropolis and province, of vivacious cultural life and quiet parks and woods with foxes and wild pigs.

Twaróg - some sort of curd cheese for which neither pasteurized nor homogenized milk is used. Ogórki małosolne – cucumbers that are pickled for 1 or 2 days with fresh horse radish, garlic, dill, mustard seed, and raspberry leaves.

My favorite places combine into a cartography which maps the past 30 years that I lived in Berlin. They are linked to special encounters and stories that often took place near the water: a meadow at the Landwehr Canal, a wooden bench at the Schlachtensee...

Translating is my profession as well as my form of existence, a way of being in the world. Two languages live inside of me in a harmonious relationship. By working as a duet, they create something new, a third component, that gives me comfort, and in this creation process both languages grant me a more sensual, deeper perception.

For me, two books illustrate the existential experience of living in another language: Eva Hoffman: Lost in Translation. A Life in a new language, and Katja Petrowskaja: Maybe Esther.

1998  Award of the Polish Translators Association for the year 1997’s best translation in humanities for „Nietzsche" by Karl Jaspers.