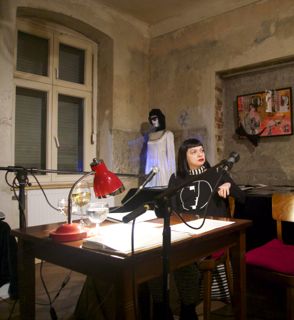 Elizabeta Lindner - born Kostadinovska (which is also her artist name) studied German Philology at the University of St. Kyrill und Method (2001, Dipl. Phil.) in Skopje and Modern German Literature and Slavic Studies (2002-2005 - Russian and South slavic literature) at the University of Regensburg, where she graduated in 2005 (Magistra Artium). Her master thesis focussed on the role of the kabbalah in Gustav Meyrink’s novel „Der Golem“. 1999-2000 DAAD-scholarship for German Philology and Slavic Studies at the TU-Dresden.

Since 2006, she is living and working in Berlin as a self-employed literary translator, editor, writer and artist. In 2007, she founded the literature portal www.slovokult.de, a portal for Macedonian literature in German, which she organizes together with other literary translators as an editor. 2008-2015 she publishes books translated from German into Macedonian at the Blesok press in collaboration with Igor Isakovski, and organizes readings with the translated writers (so far: Ingo Schulze, Benjamin Stein, Jürgen Nendza und Michael Krüger, plus book presentations). She is also colaborating with other publishing houses in Macedonia and has translated about 30 books of prose and poetry.

After the untimely death of the publisher in Macedonia in December 2014, she devotes herself to the development of her own projects.  In 2015 she founded the publishing house SlovoKult::Literatur in Berlin, in 2016 the online magazine SlovoKult::Liteartur/a in Macedonian and since the end of 2017 also in German. In 2018 she founded (and since then also manages) the Biennial of Contemporary Arts SlovoKult :: literARTour (text/vision/sound), which offers international, interdisciplinary, multilingual and multimedia presentations of authors and artists. Each edition also has an anthology with works by all participants (text and art) or tapes by the sound artists. Since the 2020 festival edition was streamed, you can see the videos on the festival's Youtube channel.

Since 2016, she has been cooperating with the Art Equlibrium art association in Macedonia, with which she organizes the SlovoKult Biennial in Gevgelija and Skopje, and since 2020 also publishes the SlovoKult :: Slovothek book series - mainly translated and multilingual volumes of poetry, which Lindner edits and publishes in two publishing houses and two countries.

Elizabeta Kostadinovska is also her artist name, with which she publishes texts and shows collages, experimental image-text works and multimedia poetry performances. She writes poetry, essays and short stories in German, Macedonian (and sometimes English) and translates them into the other language. She publishes in selected German-language journals and anthologies. In 2020 her bilingual poetry collection was published with some experimental artworks: Zweizählig zu Besuch bei dem endlosen Abgrund.

Since 2015 she participates in group exhibitions and shows her multimedia poetry performances in Berlin, Skopje and Gevgelija, in May 2017 she had her first solo exhibition in Skopje (Prize from the Art Festival Paratissima and Concept37)

2021 extensiv initiativ grant from the DÜF and the Bundesbeauftragte für Kultur as part of Neustart Kultur :: Macedonian translation of selected poems by Sophie Reyer.

2016 she was awarded the Translator's Prize of the Austrian Federal Ministry for Education, Arts and Culture for the translation of the short story collection "Die Liebe zur Zeit des Mahlstädter Kindes" by Clemens J. Setz and in 2017 for "Verbarium" by H.C. Artmann

2014 Prize for Poetry Translation "Grigor Prlicev" awarded by the College of the International Meeting of Literary Translators in Macedonia for Paul Celan "Selected Poetry".
(The prize has been awarded since 1974 for outstanding poetry translation into Macedonian).

2011 she was awarded the Translator's Prize of the Austrian Federal Ministry for Education, the Arts and Culture for the translation of the novel "Holzfällen" by Thomas Bernhard