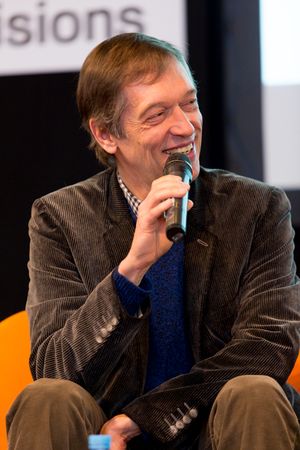 François Jonquet is a writer and art critic. He graduated the prestigious University for Political Sciences (IEP 1986). In 1992, he published a monography about the sculptor Philippe Hiquily (Hiquily, Le Cercle d’art), and Intimate Conversations with Gilbert & George (Phaidon) in 2005, which arose from a ten year collaboration and contains long conversations with the artist couple (Les Cahiers Rouges, Grasset, 2016). Moreover, François wrote a biography about Jenny Bel’Air who is a drag artist and was part of the Paris night scene in the 1970ies and 80ies (Jenny Bel’ Air, une créature, Pauvert 2001). Sabine Wespieser’s press published two of his novels: Et me voici vivant (2006) und Les Vrais Paradis (2014), as well as a short story about the last year in the life of the actor Daniel Emilfork (Daniel, 2008).A personal portrait of Valérie Lang – the actress, political activist and daughter of Jack Lang, former Minister of Culture of President François Mitterrand – was published in 2018. (Je Veux brûler tout le temps, Seuil). She died suddenly at the age of forty-seven.

I saw Berlin as a white page to fill 9 years ago.

The mystery of the town, the opportunity to stay in my own world.

I can stay totally in my world