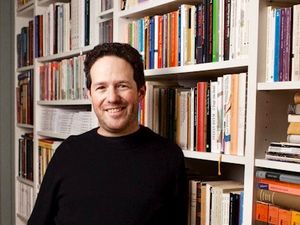 Gadi Goldberg was born in Tel Aviv, Israel in 1972. He studied Chemistry in Haifa, and Literature and Philosophy in Tel Aviv, Munich and Berlin. He is living in Germany since 2002, where he moved to the south at first, and then to Berlin in 2004. In 2005, he participated in the summer academy and 2012 in the meeting of translators at the LCB. Since 2011, he organizes and runs the German-Hebrew Translators Workshop Vice-Versa in collaboration with Anne Birkenhauer. He is currently living and working in Berlin as a literary translator with the main areas prose and philosophy.

The good weather throughout the year, the good wine, the culinary refinements… Well, actually the easy-going interaction and the (still existing, relative) tolerance for people with different opinions.

Sure I am. With every language that I speak, another facet of my personality is being foregrounded.