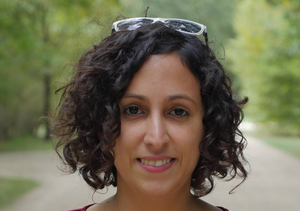 Hila Amit was born in Israel in 1985. She studied Literature and Creative Writing at Tel Aviv University, and lived in Tel Aviv until 2011, when she moved to London to pursue an academic career. She was awarded a PhD in Gender Studies from the School of African and Oriental Studies (SOAS), University of London in 2016. Her doctoral thesis was about queer Israelis who have left Israel. She arrived at Berlin in 2014 for research and decided to make Berlin her home. She never really committed to saying she was an author until the publication of her first book, “Moving on from Bliss” in 2016, though she has published poetry and short stories in several literary magazines and anthologies before that.

The politics in my homeland pushed me out to search for a better place to live in.

the quiet spaces, the green spaces, my home

Any book by Alice Munro

2016   The Israeli Ministry of Culture Prize for Debut Authors

Moving on From Bliss