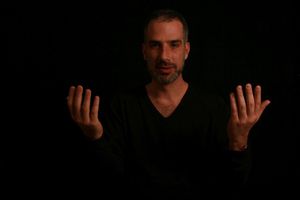 Mati Shemoelof is a Poet, an Author, an Editor, and Journalist. His diverse writing includes poetry (5 poetry books), plays, and prose. His works have won significant recognition and prizes and have been translated to other languages. His first short story collection, “Remnants of the Cursed Book” was published in 2015 by Kinneret Zmora-Bitan Dvir, the leading publishing company in Israel. He edited a vast variety of magazines and papers, most of which deal with poetry and culture. He was the co-founder of "Guerrilla Culture" Movement with the poet Roy Chiki Arad.His works have won significant recognition and prizes, including “Best debut poetry book of the year” (national art trust of the national lottery 2001); Selected appearance of “What has become of the independence day” play in the Small-Bama festival of the University of Tel Aviv; Best poetry book of the year (Haifa Cultural Foundation 2006); Honorable mention at “Haaretz” Annual short story contest (2011); Winner of the Acum prize for advocating literature in Israel (2013) and moreHe read his poems on the Chicago University and on Cornel University (2014). On 2015 he was invited to lecture in the Tel Aviv University. On 2016 he was reading his poems a special event about Mizrahi Poetry in Basel University in Switzerland. On 2016 he was invited to open the ID festival in Berlin. On 2017 he was invited to create a poetic show for the Musrara Mix festival in Jerusalem Israel.His poems were published on different Magazines: Zeek Magazine, Words without borders, Big Bridge, ”Märchenland: Die beteiligten Autoren setzten sich mit den Märchen der Gebrüder Grimm auseinander" and more.As an editor, he edited a vast variety of magazines and papers, most of which deal with poetry and culture. These works include “Echoing Identities” (Am-Oved 2007) which is one of most viewed and quoted academic work regarding 3rd generation writers in Israel, and “Aduma” (Red) – A poetry collection, which sold more than 3 editions in a very short time, and considered to be a one of the most successful and original literature publication ventures in Israel in the last decade.He was publishing regularly on Israel’s leading media channels, including: Israel Hayom (Israel’s most popular daily newspaper), were he contributed a weekly opinion column and literature reviews. He published a weekly column on Mako as well (The Internet news site of Keshet – Israel’s the most popular TV channel). Previously, he published on Ynet (Israel’s most popular news site), NRG (Israel’s #3 news site), and Walla (Israel’s most popular portal). He also took part in many TV appearances, including guest and panel member on Popolitika (public channel TV); Owls (culture channel TV); Channel 10 News, and others.He was the co-founder of the Israel Poets Union and the co-founder of “Culture Guerrilla”, an Israeli movement which propagates poetry as an accessible art form, and promotes political causes by means of art performed in public. Although the usually exclusive nature of poetry and poetry reading, this movement has achieved significant success in high profile cases regarding contemporary economical and social events, reaching front headlines in Israel, and a few mentions abroad (including one at the New York times).

Now he resided in Berlin. On 2017 he will publish his 6th poetry book. Also he work on his second fiction book. He is one of the founders of "Poetic Hefla" -  a multi lingual poetry, acting and party events. The Poetic Hafla aspires to create a middle-eastern place in Berlin, reading, acting, performing and singing in multiple languages. It combines the Arabic style party (i.e. Hafla) with the classic hip hop poetry slam.

The poetry brought me to Berlin. I was invited on 2012 to a translation workshop. I fell in love by coincidence with a Berliner and we got married and waiting for our first child. So poetry and love collided with coincidence.

The peace. It does not have a war with another country and it does not occupy another people. Other then that i love the relax way of life.

I miss what all the immigrants miss: their loved ones, family, friends, country of origin, the middle east climate and food and more other things.

Tempelhofer Feld. It is a living creature.

Yes. Berlin has changed me quite a lot. I became more queer, in everlasting translations with the other people i meet.