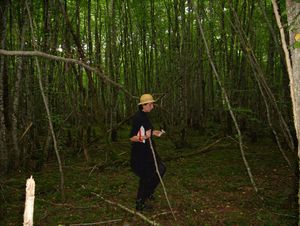 Monique Rival was born and raised in Grenoble among many amazing brothers and sisters in an unclassifiable and declassified family that didn’t care for discipline. Her school years were affected by severe health issues  and a rebellious behavior. She studied German in Paris, Munich and in Berlin were she moved in 1986 and where she still lives up to today. Reading books and meeting people are the most important things in her life.
She is a translator for German>French since 1992.
In 2000, she participated in her first summer academy at the LCB, as well as in translator workshops in Straehlen and Looren in the following years.
She was happy to get a three-week Elmar-Tophoven working scholarship in CITL/Arles where she continued her translation work of Nino Haratischwili’s „Das achte Leben – Für Brilka“. The same year, the Bosch Foundation financed her and her co-translator Barbara Fontaine a research trip to Georgia.
Monique Rival translates novels, essays and books about art and art history.

The many diverse ‚Kieze’ [sort of neighborhoods], the water, the parks and woods, the cafés, the cosmopolitanism.

Many friends and the sky above the Seine’s bridges in Paris.

The Matthäus graveyard in Schöneberg

I feel more free and open.