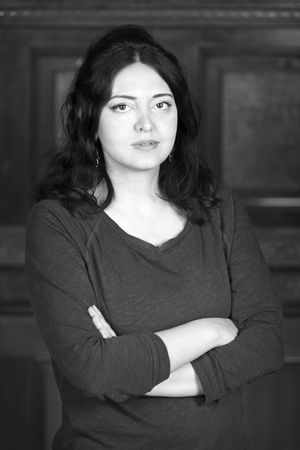 Rasha Abbas, journalist and author, was born in the coastal town of Latakia (Syria) in 1984, and grew up in Damaskus, Syria’s capital. She started studying journalism at the University of Damaskus, but did not finish her studies due to a suspension in 2007. One year later, she published her first short stories collection called Adam Hates the Television for which she was awarded as a newcomer at the Damascus Capital of Arab Culture Festival. Since then, she has published many short stories and columns for the PEN Atlas, Words Without Borders, The Common, Süddeutsche Zeitung, Al-Quds al-Arabi, As-Safir Newspaper, and O2 Publishing.
Rasha left her home country in 2012 to go to Beirut, and then went to Germany in 2014 as a Jean-Jacques Rousseau Fellow at the international academy Schloss Solitude. Rasha considers coming here by plane with an official visa pure „luxury“. She is currently living in Berlin.

World policy I would say. It was my choice after I moved to Germany in 2014, after I had to leave Syria. Berlin was the best choice due to many reasons, like its friendly atmosphere, and I already knew some people here.

I love how easy it is to communicate here. You can have those small conversations on the street at any time, when you ask someone for directions or for some tobacco or rolling papers. I also love the used furniture on the streets you can just pick up and take home.

Sometimes I miss the calmness. The city is always moving and this can be a stress sometimes and overwhelming.

One of the places that left an emotional impact on me when I visited Berlin was the Max Liebermann villa. The story, the empty squares on the walls where the now missing paintings were supposed to be showing the landscape surrounding the house.

Maybe, I mean the changes that happen to your writing are similar to when your weight changes: You are the last one to realize it. I can say I lost some of the tension I had before and which was reflected in my writings.

A Thousand Rooms of Dream and Fear by Atiq Rahimi.