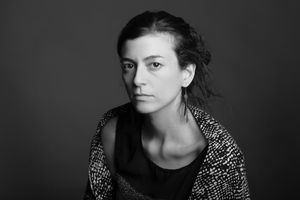 Samanta Schweblin was born in 1978 in Buenos Aires, where she studied television and cinema. Her short story collections, El núcleo del disturbio (The Core of the Riot), Pájaros en la boca (Birds in the Mouth) and Siete casas vacías (Seven Empty Houses), were awarded the Casa de las Américas, Juan Rulfo and Ribera del Duero Short Fiction prizes. Her first novel, published as Fever Dream in English, was awarded the Tigre Juan and Ojo Crítico prizes and has been nominated for the 2017 Man Booker Prize. Samanta Schweblin’s works have been translated into over twenty-five languages, and she’s received scholarships from a number of institutions. Schweblin has lived briefly in Mexico, Italy and China, and now resides in Berlin, where she’s been writing and teaching literary workshops for four years.

I came on a DAAD scholarship, a one-year writing program and instantly fell in love with the city. I started to teach some literary workshops in Spanish and could make a living from that. And soon it was clear that it wouldn’t be so complicated to stay.

It is a wide city, in many ways. Wide streets, wide apartments, but also it’s wide in its way of thinking, of making art, politics. It’s so wide that it also contains the opposite sides of all of these great things.

My family, my old friends, the libraries and the freedom of being immersed in a language that is my own.

Home. Also the Gloria Bar, where I usually to write on Sundays. My seven kilometres around the Landwehr canal. The Iberoamerikanische Bibliothek.

Maybe. Of course, you absorb much of the things that surround you. I have learned a lot over the years as a foreigner, living in a culture that is not the one where I grew up. We only have one life…

Too far from home, by Paul BowlsThe Third Policeman, by Flann O’BrienKlaus and Lukas, by Agota KristofOlive Kitteridge, by Elizabeth Strout And other one hundred books...