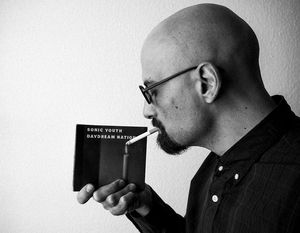 Zaza Burchuladze was born in Tbilisi (Georgia) in 1973. He was reborn in Berlin in 2013. He is a contemporary novelist and dramatist. He graduated from the monumental and ornamental painting department at the Tbilisi State Academy of Arts. Since 1998 he has been publishing his stories in Georgian newspapers and magazines. He works as a freelance journalist for Radio Free Europe/Radio Liberty. His stories often startle readers because of his experimental writing style and the provocative themes broached by the author, which are usually considered taboo: he writes about political conformity, violence and brutality, and addresses ideological and religious topics as well as sexuality.

The illusion of openness and tolerance.

How emotional Georgian people are and their naivety.

The top of the flak tower in Humboldthain – the tower was used by the Luftwaffe to defend against Allied air raids.

I don't know myself well enough yet.

„The Metamorphosis“ by Kafka, „The Idiot“ by Dostoyevsky, „Journey to the End of the Night“ by Céline, „Lolita“ by Nabokov etc.